Rambo and Charlie are best friend puppies. They make an unlikely pair because they’re so different in character. Rambo is energetic, rowdy and exuberant. He loves running around and has a mischievous side to him. Charlie, on the other hand, is laid back, gentle and unhurried. He prefers to relax and take it easy. Despite their differences, they have found a way to become inseparable.

Rambo loves to tease Charlie. He often grabs Charlie’s tail, and hides his toys. Rambo only means it in a playful way, and doesn’t mean to bully Charlie.

One afternoon, Charlie decides to take a nap on the bed. They have just had lunch, and he’s now full and sleepy. He notices that Rambo isn’t coming for a nap, and Charlie has his suspicions about his whereabouts but he’s too sleepy to go and investigate.

So Charlie settles down and gets comfortable, and starts to doze off.

Meanwhile, Rambo is in a playful mood, and feels like getting up to no good. He decides to plot something. He thinks about what kind of prank to pull this time. Something different to all the other pranks he’s played on Charlie.

Aha! He has an idea!

Rambo waits until Charlie is fast asleep. He finds a hiding spot to perfect his plan and wait for the right moment.

When he hears Charlie snoring, he gets up. It’s action time. Rambo creeps into the room, moving slowly until he reaches the bed. He then leaps up, landing on top of Charlie, who jumps awake with shock.

Rambo sees that his plan worked, and is so excited that he starts running around the bed while Charlie just sits there trying to make sense of what just happened.

Suddenly, Rambo runs a little too far and loses control, falling off the bed. Charlie, goes to see if he’s okay but laughs at the same time. “That’s what you get for pulling pranks on me!” he says. 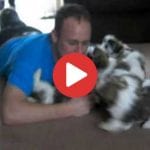 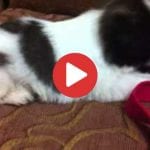