Fluffy is a fluffy Shih Tzu puppy. At only two months old, he is already a little explorer. He is a curious and inquisitive little guy, and loves to explore his surroundings, finding out what things are and learning about the world around him.

His owners like to watch Indiana Jones films, and Fluffy often sits and watches them too. He is inspired by the films, and his dream is to be like Indiana Jones when he grows up – well, at least the doggie version of him.

One morning, Fluffy wakes up and does a big stretch. “What should I do today?” he wonders. He looks at the sofa in the living room. To us, a sofa is just a sofa. But to Fluffy, a sofa is a gigantic mountain. With tall, steep cliffs to climb and deep trenches to look out for, a sofa is a mission that Fluffy is ready to take on.

He makes his way to the base of the mountain, sniffing round for the best route to start his climb. He finds a path, makes his leap and uses his paws to lift himself up the rocky edge.

There is a plateau, and Fluffy decides to explore the area. The ground is bouncy, and Fluffy digs his claws deep into the ground to get a good grip. He finds a canyon deep in the ground and cautiously lowers his paw into it. The canyon leads to a cave in the mountain’s cliff face and Fluffy stops and thinks “what would Indiana Jones do?”.

He figures that obviously, Indiana Jones would go into the cave! So the fluffy Shih Tzu puppy starts digging his way into the cave, leaving the sunlight behind him. Because that’s what Fluffy is – brave, fearless and the best Shih Tzu explorer around. 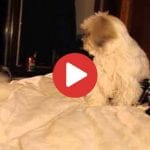 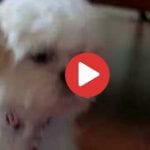