Apart from being smart, Shih Tzu is also daring and may try to jump down despite the distance. So never leave the puppy alone on the table. At 4 months of age, the hair in the forehead will be long enough to be collected into a top knot.

This must be practised right from the start. Another thing to do is train the puppy to lie on his/her side on the surface. This skill will make haircare easy later when the dog has matured and has a lot of hair.

You could begin by teaching the puppy to:

The puppy is going to think, “Now that they’re holding me so tight, I’m wondering what’s gonna happen.”

Instead, the trick is to loosen the grip little by little after the puppy has remained peaceful for a while. In this way, they will learn to loosen up and understand that this is not a big deal to do. Furthermore, while lying on the table and being groomed, you can also take a nap. 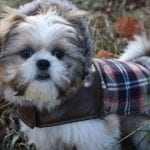 15 Adorable Ways Your Shih Tzu Says “I love you!” 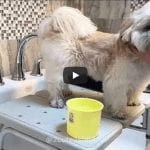