by admin
3 years ago2 years ago
4.5kviews

We discovered today that our adorable puppy Sarafina was not only having a bad hair day but was actually afraid of the fart noises we made at her! Yes, this Shih Tzu dog hates farts!

Although noise phobias can be an issue with dogs, Sarafina doesn’t tremble, hide, or involuntarily urinate but instead just gets extremely shy and walks away just like any other lady-dog would! Watch the video below to see her reaction to “those noises again”.

As you can see in the video above, we caught her attention and called her over. She seemed really happy to be getting all the attention but as soon as we started making those noises, she immediately backed away a bit and sat down on the couch and watched us, shyly wagging her tail behind her.

As soon as the noises stopped she was ready for more attention and immediately stood up and rubbed her nose into the camera lens. Then we went on to make really loud fart noises and as soon as we did she came running over to see what was wrong.

As we continued, she walked away and kind of tucked herself behind the back of the couch. 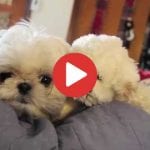 Abby and Juno’s Adventure in the Park
White Shih Tzu