by admin
1 year ago3 months ago
3.9kviews

Playful Shih Tzu and His Sibling. The narrator explains that Bentley, a Shih Tzu puppy, is much happier when he’s able to roam around on the floor and play with his brother. Whenever you have a puppy dog like Bentley, it’s important to make sure you watch them when they play as puppies are more susceptible to injuring themselves just because of how their limbs develop and how small they are in general. Watch the video below to see Bentley and his brother play!

Playful Shih Tzu and His Sibling

As you can see in the video Bentley does NOT want to walk over to his owner and would rather happily explore the home. Eventually, though, he saunters over to the camera and we get a good look at how adorable he is. He and his brother begin to play with one another, roaming around beneath the legs of the kitchen dining room set. Bentley repeatedly would slam one of his front paws down into the floor to try and play and eventually ended up coming back over to their owner to chew on her fingers for a while. 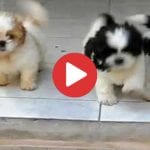 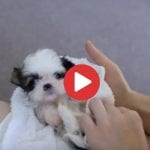 5-week-old Cali Enjoys Being Pampered After Her Bath