Among the many things you might need to understand early on in pet ownership is never to reward negative behavior, ever. If your Shih Tzu bites and behaves badly, then the last thing you’d want to do is show him or her any kind of affection whatsoever. You can completely withdraw your affection and love and turn your attention away from your Shih Tzu.

You must show your pet that you would not condone his or her aggressive behavior. If your dog doesn’t have psychological issues, this should do the trick after making your dog understand the kind of negative behavior that stops the party.

However, if your Shih Tzu carries on with this behavior regardless of what efforts you make to rectify his or her behavior, then you might want to accept the possibility that you have an unstable pet who suffers from an aggressive disorder.

Like other people, dogs could also have emotional and mental troubles. These disorders could sometimes be brought about by trauma that happened when he/she was just a pup. Dog psychologists and behaviorists are knowledgeable and trained to assess the body language of your Shih Tzu to identify what’s wrong with them.

In fact, some dogs could wind up on prescription medications for depression, anxiety, and a string of other mental issues. For instance, a Shih Tzu who suffers from thunder anxiety could be given a small dose of Xanax just before the bad weather happens. Of course, a vet should be the one to tell whether or not your dog would benefit from prescriptions or not. You should not give your dog pills that were not prescribed by his or her veterinarian.

Your Shih Tzu Reacts to Your Emotions

One huge mistake that dog owners with aggressive dogs commit is that they would get too stressed out themselves when dealing with their dogs. If you own a Shih Tzu that you know becomes agitated and aggressive when strangers walk up to them, then you’re bound to get anxious at first sight of a stranger.

Consequently, this would set your dog off. As a pet owner, you must learn to stay calm and train yourself not to react negatively around your Shih Tzu. Of course, this isn’t an easy thing to do, particularly if you’re already an anxious person, but you’ve got to try. Your Shih Tzu would stay a lot calmer if you would, so you need to work on your own emotions when dealing with a Shih Tzu that tends to bite.

A lot of people neglect the fact that small dogs, like Shih Tzus, could bite just as well as big dogs. Smaller dogs actually tend more to become hostile and aggressive than other larger breed dogs. The only issue is that it’s typically seen as cute or funny. You might even find it funny unless you’re on the receiving end of a small dog’s bite. However, the fact of the matter is that no one should take dog bites lightly.

As a Shih Tzu owner, the burden is yours to keep your canine friend and the people your dog encounters safe. It’s very important for your safety, your family’s, your dog’s and everyone that aggressive behavior is curbed the soonest possible time. 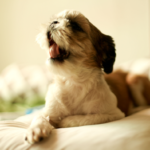 How to Potty Train Your Shih Tzu Puppy in 4... 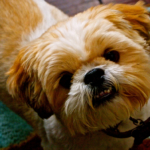