Not many puppies are courageous to go on adventures with their owners and pull dangerous stunts that leave your heart in your mouth.

All these are true unless the said puppies are all like courageous and stunt-pulling Wookie. Well, meet Wookie, The Skateboarding Dog.

So here’s how Wookie realistically pulled that Hollywood script stunt in this video.

Wookie gets sandwiched in both legs of his owner on the skateboard.

The show starts (yeah, it’s a show for a brave puppy-like Wookie) and things get really scary because his owner leveled it up and the speed was pretty high.

In the video, Wookie, the skateboarding dog, looks fearless even as the speed gained more momentum. He’s not jittery, he’s just laid-back enjoying the ride.

But then the unexpected happened, Wookie fell off the skateboard and landed on the tarred road. Realizing that Wookie is off the board, the owner rolled backward. Now you’ll be thinking he’ll just pick Wookie off the floor and place him back on the board.

That’s rational, but remember – this is Wookie, not the kind of puppy you meet every day.

So Wookie pulled his stunt by rolling sideways on the floor towards the direction of his owner and flipped himself back on the skateboard.

At the end of the video, there’s a message saying that no puppy was injured in the course of the shooting of the video.

In essence, Wookie was more than just a stunt-pulling Hollywood-film-worthy puppy, but he’s also strong to have survived that accident and came out unscathed.

Wookie left us all stunned! 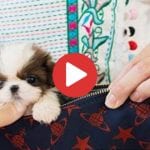 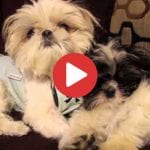