by admin
2 years ago3 months ago
1.3kviews

If you love extremely small puppies, then this one should be your fetish. Small, beautiful and harmless; they are just so admirable and will make you want to cuddle them all the time.

In this video, the teacup Shih Tzu, named Lucy is having a good time in the hands of two adults who treats him with the utmost care, bearing in mind his fragile nature.

His small tongue is been pressed while he licks the finger doing the pressing, he’s tickled while being laid down on his back, he’s covered in a material that looks like a duvet with just his head visible and is being caressed. He looks so young, feeble, innocent and adorable. His tender nature is sheer beauty and we can’t deny him that compliment.

Surely, he has a lot to learn as he grows up but, at this age, he is prone to learning very fast and can adapt to his surroundings rapidly which makes him a catch.

At the end of the video, he’s seen running towards a lady. He’s also at one point found limping in excitement, obviously, he loves to play.

This Shih Tzu is so tiny, if you aren’t careful around the house, you could step on him and break a few of his bones. So small he could fit into the palms of a macho man effortlessly.

When you’ve got a teacup Shih Tzu like this, it teaches you how to care for tender pets and you just can’t help but become so playful with them. 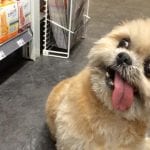 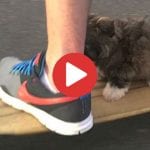 Wookie, The Skateboarding Dog, Wows Us