Well, discoveries are a given when it comes to life in general and for puppies, it’s just a norm. But when the said discovery has to do with exhibiting involuntary actions like humans, then it becomes a sort of challenge for them.

In this video, adorable little cooper discovers he has hiccups much to his surprise – probably his first hiccup.

He must have been eating too quickly or taking in a lot of air alongside his previous food appointments since these are the possible causes of hiccups.

Whichever is the case, he’s quite busy in that video having puppy hiccups. As it appears, he is having difficulties managing the situation. But there’s really nothing he can do about it since it’s involuntary.

But then he’s also engrossed with the biscuit that he’s eating which makes his attention divided.

The hiccups regularly interfere with his eating process, and he looks quite confused but won’t let the hiccups distract him from his present engagement.

There’s also the interesting part where his tail pops up each time he jerks up to the rhythm of the hiccups. It’s funny but pretty to watch at the same time.

Cooper isn’t too worried about his bout of puppy hiccups as he treats it with mild disinterest. Perhaps he won’t find it strange when next it happens, but for now, there’s one thing we can’t take away from this video – Little cute Cooper looks very funny having hiccups and his tail is not helping matters one bit. 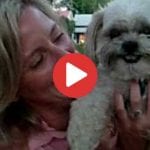 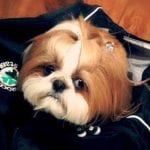 15 Must Know Facts about your loving Shih Tzu!