by admin
1 year ago3 months ago
398views

What is the Shih Tzu Bichon Frise Mix?

A small toy dog that resembles a real teddy bear may sound like the stuff of fairy tales and kid’s storybooks, but it does exist, and it is called a Zuchon or the Shih Tzu Bichon Frise Mix.

If you are considering bringing a Shih Tzu Bichon Frise mix dog into your home—or if you have just brought one to your family—here is all that you should know about this adorable but mighty breed.

Shih Tzu Bichon Frise Mix
What Can You Expect If You Buy a Zuchon?

The Shih Tzu Bichon Frise mix breed has not been around for too long, but these dogs have quickly established a reputation as toy dogs that are adaptable to family life.

They are also referred to as “Zuchon Teddy Bear” because of their round faces that look like a toy teddy.

Because the Zuchon is a crossbreed dog, it is not really possible to predict precisely what they would look like from birth—a Zuchon puppy could take on the features of either the Shih Tzu or Bichon Frise and might even favor one parent breed over the other.

However, the fact that you could nearly always count on is that your Shih Tzu Bichon Frise mix would have a fluffy coat—a common feature of both parent breeds.

Because both the Bichon Frise and Shih Tzu both have beautiful long coats, you could expect your Zuchon pup to have this kind of coat too. The hair might be curly or wavy. The Bichon Frise is usually white, but since the Shih Tzu breed comes in a variety of colors and has no general or standard color of the coat, expect that the Zuchon pups don’t either. 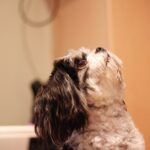 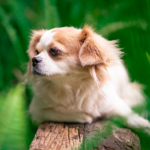