by admin
2 years ago3 months ago
3.2kviews

Chopper is a mini Shih Tzu puppy. He is only eight weeks old and is a little ball of cuteness. He was recently adopted by his owners, and they have given him a loving new home.

Every day, Chopper wakes up and gets excited about the day ahead. He loves his new home, and all he wants to do is explore his surroundings. Each day, Chopper finds something new that he hasn’t seen or played with before. As a puppy, everything around you is new and fascinating, and Chopper’s captivation with everything provides much entertainment for his owners.

One thing in particular that Chopper loves is being pampered. His owners often give him cuddles, give him belly rubs, brush his fur and cut his nails. He loves this so much that he often falls asleep when they do it, he can’t help himself. And although he has a comfy bed filled with soft toys, he would still rather fall asleep in his owner’s arms while having his head stroked.

One of Chopper’s favorite games is a catch. He has a large collection of balls, with different shapes and colors. He has plastic balls, softballs, and bouncy balls. He is always asking his owners to throw the ball so he can catch it and return it. It excites him so much that whenever they throw the ball, he runs across the room and slides on the wooden floor.

But there’s nothing that Chopper likes more than eating. After a long, hard day of playing, he always looks forward to the moment that his owners get his dry food out. He hears the familiar shaking noise of food in his bowl, and drops all his toys and runs to the kitchen.

Check out the daily life of Chopper, the mini Shih Tzu puppy, here: 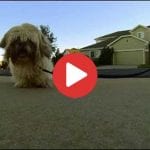 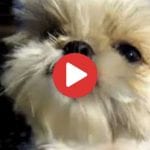 I am the Cutest Shih Tzu