When it comes to adorable cuddles, lap dogs, and nose boops, most dogs know just how to uplift your spirits and brighten your day.  Some dogs will even boop your nose right back when you do it as a way to show affection and attention. Shih Tzu, Lola, a then 11-month old puppy is a bit different than other puppies her age though and actually only “tolerates” nose boops. If anything, she hates getting tapped on the nose.

In the above video, you can clearly see that Lola doesn’t really like it when her owner taps her on the nose, exclaiming boop! Not only does she bring her paws up to say, “Hey, stop that,” but she actually curls her lip a bit too. Eventually, it gets to the point where Lola says that’s enough and places her paws directly against the owner’s hands so she could no longer boop her nose. Yup, definitely hates it! 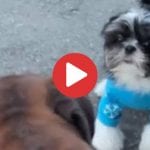