It is most important that the nails of your Shih Tzu be trimmed regularly. The overall health of the dog may be affected if its nails are neglected. Walking on their nails could cause your Shih Tzu’s toes to spread apart, creating an unnatural way of walking.

If you have slippery floors, the dog’s legs will regularly slide, and its ankles will be slightly twisted every time they try to walk. In a show dog, the movement could be disastrously affected, and the damage might be difficult to correct. For the companion dog, problems can also develop over time.

At the very least, untrimmed nails can cause a lot of discomfort for the dog, particularly later in his life. Nails that are very long could also snag and break, causing a lot of bleeding.

In extreme cases — especially with the claws that many Shih Tzu have — the nails could curl around and pierce the dog’s soft tissue or their pads, creating an unpleasant mess.

Clipping their nails is easy to learn and can be mastered by a little training. Yet many have put it off because of fear of a quick cut, causing pain and/or bleeding. Obviously, when you trim your nails, you are just trimming the excess away. The key is the ability to identify the excess and the position of nerves and blood vessels.

It’s best to train your Shih Tzu by starting a nail trimming routine when they are young; the younger, the better. If your puppy isn’t used to having his nails trimmed, you should gradually begin practice sessions during which you simply restrain the puppy gently, talk to him politely, hold their toes firmly.

It will take daily handling for a week or more to reach a point where your Shih Tzu is tolerating this well. 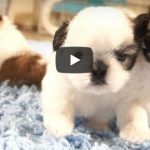 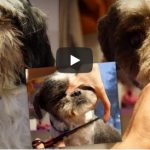