Additionally, bear in mind that training your pet to obey your rules and follow your commands should be done with caring intentions. Although you would need to assert your authority and set yourself as leader of the pack, you could and should be a loving and fair leader.

Aspects that Contribute to the Shih Tzu’s Stubborn Behavior

Not comprehending what is expected of them. Your Shih Tzu can’t do what it doesn’t understand. For instance, if you have never trained your Shih Tzu to heel, the odds are low that your pet would naturally follow your lead.

No motivation to obey and listen. While your Shih Tzu might randomly do as you tell them to, in a lot of instances, dogs need a reason to listen to their human. There are a couple of parts to this:

As a Response to Their Canine Instinct

When your dog sees you as his leader, there’s a strong canine instinct to listen and obey the ‘Alpha.’.

For a Treat or Reward

Until respect is earned for your Shih Tzu to instinctively listen and obey, positive behavior has to be rewarded and praised. Training treats are considerably the quickest and, most straightforward approach of letting your Shih Tzu know that his action was ‘good’. Keep in mind that if it is the right kind of treat, your dog would surely try to replicate that rewarded behavior.

You give in to their stubbornness. Regardless if it takes you five minutes or an hour, if you give in to your dog’s stubbornness, you are unintentionally teaching him that being stubborn and persistent could get him what he wants. A stubborn Shih Tzu will hold his ground if he knows that his human will eventually cave.

How to Get Your Shih Tzu to Obey You

For everything to fall properly into place, establishing a hierarchy should be initially done. Your dog should see you as the ‘alpha.’ He should obey and listen to you and see himself as a member of the pack. If your dog doesn’t see you as an Alpha, there could be very little obeying.

For Shih Tzus with more serious obedience issues and particularly for dogs that show aggression, stricter hierarchy rules would need to be set in place, like always keeping a superior position and giving sufficient time-outs for disobedience and other negative behavior.

If your aim is something new, such as successful dental care at home, do gradual and slow desensitization of shorter sessions, with rewards or treats given at the end. Gradually transition to longer sessions.

These basic commands include sit, which is probably the most important and the easiest command to teach, along with stay, come, and down. Additionally, the crucial ‘heel’ command where your Shih Tzu immediately walks to your left and controls the pace and direction. 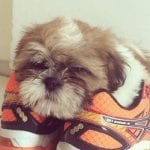 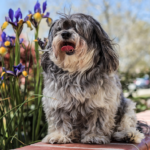 3 Kinds of Shih Tzu Allergies and the Best Ways...